When chef Paul Fehribach of Big Jones found out farm-raised salmon got its bright orange flesh color from dye in its feed, he knew there was a problem.

For Naha’s Carrie Nahabedian, it was seeing the fish she usually ordered gradually shrink in size that made her think twice about what she was buying.

And for Carl Galvan of purveyor Supreme Lobster, the inspiration to do the extra legwork to guarantee that the fish and seafood he’s supplying to his restaurant clients come from reliable sources was simple: “If we, and future generations, want to have jobs in this industry, we better take steps now to save it.” 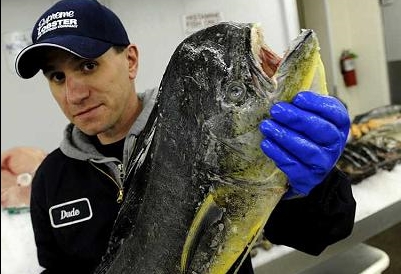 While you’d be hard-pressed to find someone who doubts the value in eating sustainably raised seafood, doing so can be tricky.

These days you need to not only know where the fish comes from and whether it was farmed or wild, but how it was caught, since some types of harvesting are harder on the environment than others (trawling, which uses a net dragged deep underneath the boat, is the worst).

Even armed with all that information it’s not cut and dry. To wit: Farmed trout and barramundi, for the most part, are good, while farmed salmon and shrimp aren’t. But there are plenty of exceptions in between.

Then, just when you think you have it all figured out, it changes. In fact, it was a sighting of Chilean sea bass on the menu of a new buzzed-about Chicago restaurant that got me thinking about the state of sustainable seafood today.

Turns out that one of the biggest no-nos in the seafood world is now OK to eat. That is, providing you get it from a small fishery in the Antarctic region around the island of South Georgia in the South Atlantic Ocean.